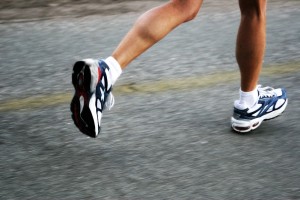 Many foot, ankle and lower body injuries require a period of immobilization in casts, walking boots or semi-rigid braces. This “off-loading” of forces allows the body to conduct its repair work on bone, tendon, ligament and muscle tissue. Unfortunately in many cases, while the tissue heals, compensations occur due to the change in biomechanics. This can result in pain or injury in other areas either during the immobilization period or shortly after as you try to return to your normal activities.

Common imbalances that can occur as a result of immobilization, and that often could be avoided, include the following:

A walking boot or cast typically makes that leg functionally longer. If you watch a person walk with a boot on it appears like they are walking with that foot on a 2×4 board and the other on the ground. Their pelvis will be higher on one side and the beltline un-level. Over the course of days and weeks this can put tremendous strain on the hip joints, pelvis, and lower back on the same side or even over to the opposite side. It can easily cause a pelvic mal-alignment (think of a crooked car alignment). So while the body part that is immobilized is in fact healing, a new pain can easily develop elsewhere.

Muscle overuse and muscle inhibition in the same or opposite limb

Muscles are not simply strong or weak. At any given time our nervous systems may have very good communication with specific muscles (good “activation”), or poor communication which is called “inhibition”.

A simple example would be your cell phone. At one moment standing outside a store you may have five bars of cell phone coverage and an excellent signal, but walking 25 feet inside the store you suddenly notice your signal is down to just one or two bars. The phone still works, but the signal is not as clean or clear. This can occur with muscles (muscle inhibition), and when it does the body compensates by using other secondary muscles to perform the physical task. A beautiful and amazing design for sure, but if it persists it will lead to “overuse” of those back-up muscles.

Altered joint mechanics above or below the immobilized area

Our joints work together to create motion, but you cannot take motion away from one (immobilization) without affecting the others. Think of having a cast on your foot and getting up to go from the couch to the kitchen. You’ll get there for sure, but having your ankle immobilized will completely alter your walking mechanics by modifying motion through the knee, hip and pelvis.

It’s not uncommon to see a patient who has a boot on their foot hyper-extend their knee. Being unable to bend through the foot and ankle, the body has passed that particular motion demand on to the knee. Once again, while the foot is healing, we’ve traded one problem for another.

This week in the clinic I started an 18 year old athlete who suffered a bad left foot injury late in the fall football season. This injury required surgery in December then lengthy immobilization in a cast followed by a walking boot until just two days before his first PT session. He reported just “mild soreness” in the foot but it was interesting to see his walking gait, which showed a slight limp, but more significantly that he walked with his left foot much more “toed-out.” Additionally, when he was lying on his back his left leg was completely splayed out while the right foot was pointing straight up toward the ceiling. I checked his left hip rotation and found he had almost no inward rotation on that side, but the right side was normal. Also, when I attempted to line up his ankles it appeared one leg was longer.

Further investigation revealed that the reason for this asymmetry was a pelvic-hip mal-alignment, likely caused by all the altered mechanics from walking in the cast and boot. Additionally, every night while he slept on his back the weight of the cast/boot caused his involved leg to fall to the outside for hours on end, exactly how it now appeared in his walk. It was at this point that he admitted that his left low back was also “pretty sore.”

Muscle testing of this young man was also revealing. He is 6’ tall, 195 lbs. and very muscular yet he was unable to activate his left core and hip muscles (the side of his injury) and felt completely weak on just that side. He expected that his lower leg and calf muscle would be atrophied from the lengthy immobilization, but he was shocked at the weakness all the way up at his hip and core.

If you are wondering if just additional time out of the boot will correct his alignment and muscle inhibition, sorry Charley. Although his foot will need some rehab it is technically “fixed,” but the rest of his lower body biomechanics are a mess. What’s worse is that he is trying to get ready for a competitive baseball season. Imagine as a right-handed hitter trying to rotate in to the left leg when your pelvis is out of alignment and the hip lacks rotation. At the very least it will affect his hitting mechanics and it could also result in another injury.

So what will this young man’s treatment plan be?

Number 1 in this treatment plan is pretty obvious, and maybe number 4 as well. I’m guessing most people would never think about numbers 2 and 3.

Am I worried about this young athlete’s foot? Really not very much at all. I think his motion and strength will come back quickly. I’m more concerned that we address all the “collateral damage” and altered biomechanics. But, now that we have correctly identified everything I think it will go very well. On top of all that he’ll be “bored” not having the low back pain!

I think the key take-away from this is to understand that everything is connected. Just like the song we all learned at a young age; “the leg bone is connected to the…….thigh bone, the thigh bone is connected to the…….hip bone”. When you have a pain or injury at a specific joint that requires immobilization, always consider what is going on at the joints above and below. Have your physical therapist test to see whether your body developed some compensatory patterns during the healing process that need to be addressed.