We humans are certainly creatures of habit. How many times a week do you wake up and feel you are repeating the previous day? Alarm goes off too early, roll off the same side of bed, drink from the same cup of coffee, brush your teeth the same way since you were a toddler, drive the same route to work, and on and on. There may be slight variations during the day (Yay!), but for the most part many of us lead a routine that can often resemble Bill Murray in Groundhog Day. The familiarity can be good and it makes us comfortable. Change and unknowns can be stressful and uncomfortable.

The Dalai Lama once answered the question, “If you had only one word to describe the secret of happiness, and of living a fulfilling life, what would that word be?” Without hesitating the Dalai Lama replied, ‘Routines.’ A routine is something we do regularly, without much planning or thinking, and often can reduce stress and help our lives move more smoothly. But from a bio-mechanical and neurological perspective, is too much routine good for us?

Another example that a patient and I were recently discussing is driving. Her 15 year old son received his permit and is at the beginning of a learning curve to operate a 5,000 pound machine while navigating around town with other similar machines. Do you remember when you first learned to drive a car? Radio was off. Death grip on the steering wheel. Front corner of the car was lined up with the street lines, who the heck knew what to do if there were no lines! Every action was consciously thought about. Fast forward to an adult who has been driving to work for 15 years. The adult doesn’t have to think much to navigate the roadway. Often people drive to work and don’t remember the drive they just took! Many talk on the phone, text (don’t do it!), change radio stations, and pass cars, as they straddle the steering wheel with their thighs, all at the same time! (NOT recommended people!) That’s why over 50% of car accidents happen within 5 miles of your home. Your brain goes into auto-pilot mode and if something novel occurs during the drive, your brain can’t disengage from auto-pilot quick enough to react appropriately.

While being on auto-pilot is easy, we sometimes need to flip that switch off and challenge our patterned behavior. That’s because our brain ONLY learns by doing something NEW. There was a famous study performed by researchers at MIT using rats navigating a maze. They studied the brain function of rats as they learned the path of a maze and found that as the rats learned how to navigate a maze, its mental activity decreased. As the route became more and more automatic, the rats started to think less and less.

Whenever we go into a routine, habitual behavior, our brain activity shifts from our higher-thinking cerebral cortex to our more primitive-thinking basal ganglia. By freeing up mental space from our cerebral cortex, our brains can use that mental energy for more important stuff, such as learning new tasks and performing creative activities. By actually doing something new over and over again, your brain wires new pathways that help you perform this new thing, better and faster. Pretty cool!

Why am I talking about all this in a physical therapy blog? Because patterned movements and behaviors drive most of you in to our clinic! I have talked much about how we are asymmetrical beings (Contrapposto, People are Fascinating). These asymmetries arise for a variety of reasons, however, they are often exacerbated by our patterned movements and behaviors. Always opening a door with the same hand, operating a mouse with the same side, standing more on one leg, doing the same exercises at the gym, etc. Just think of all the repetitious, routine behaviors you do during the day! 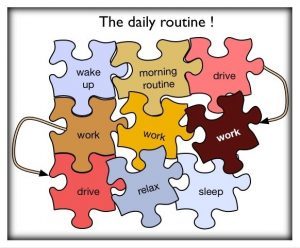 Some of these behaviors are good for us. Eating healthy, moderate exercise, connecting regularly with loved ones, and so on. Other patterned behaviors are not so much: smoking, too much screen time, eating regular junk food, drug abuse, etc. Patterned, usually subconscious, movements and positions often lead to injury. Take, for instance, a golfer. During an 18-hole round, a typical golfer will take at least 50 swings; including a few warm up swings before each hole, that would put the total around 150. Another 50-150 are chips and putts of nearly the same movement on a smaller scale. If you add in a bucket of balls at the driving range before, that adds another good 100 swings. So, we are up to at least 400-450 swings on a day you play 18 holes. Collegiate and professional golfers are often known to practice hours a day on their swing, and hit repetitions in the hundreds and thousands per day. OK, so the math may not be spot on, but you get the point. That’s a whole lot of repetitions of the same movement. Yet, those thousands of golf strokes pay off for those golfers. Their patterned routine movement becomes deeply ingrained in their brain to allow them to consistently hit the ball where they need it to fly. Great for the golf game, potentially not so great for their body. A similar thought process can be applied to tennis, baseball, volleyball, gymnastics, ping pong, billiards, swimming, and pretty much any other practiced movement.

Nearly every athlete that comes in to the clinic with an injury will probably find themselves, in some way, doing the opposite of what they put their bodies through in their sport. They may be in positions, initially, that does not feel like they are performing their sport, but, somehow, their body is doing something opposite of their patterned movement. This needs to be done to oppose their dominant movement patterns that may be contributing to their pain and injury. We need to challenge their bodies to do something NEW and different to LEARN a more optimal way of moving.

The same goes for non-athletes. You may always stand more on one leg, or breathe too much with your neck muscles, or always text with the same hand. To address the symptoms that may be arising from a patterned activity, we need to challenge that routine and pattern and do something NEW, to LEARN a different patterned movement.

Many patients often get frustrated, at first, when we do a new exercise because it is so different from their patterned, routine behavior. Their brain struggles to find new neural circuits to complete the unfamiliar task. One paper published by a Duke University researcher in 2006 found that more than 40 percent of the actions people performed each day weren’t actual decisions, but habits. Breaking old habits requires establishing a new behavioral pattern, a new habit. To modify a habit or patterned movement, you must decide to change it. We, as physical therapists, are here to help guide your change.

So when you come in to the clinic, be ready to challenge your brain and body with a novel movement or activity in order to help with your symptoms. We’ll alter that Groundhog Day pattern of movement and introduce a new stimulus to help you address your symptoms.

Stay tuned in for my next blog to learn ways to help change your patterned, habitual movements and learn new, healthy ways to move.